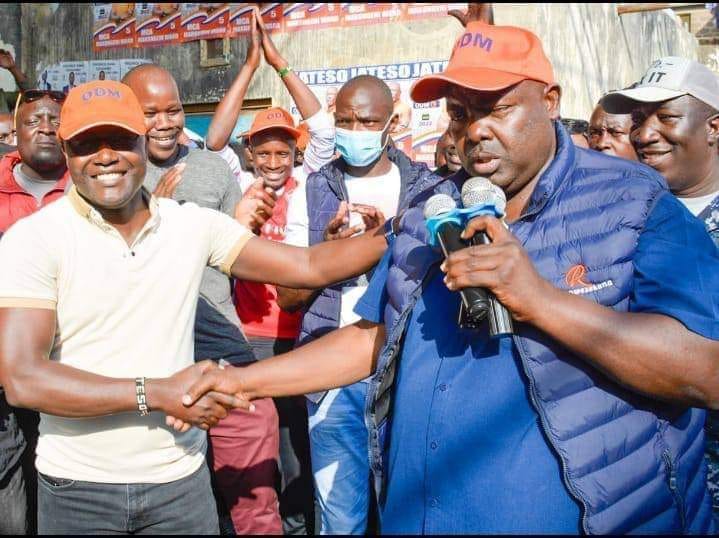 Raila intervened after Aladwa started supporting the Democratic Action Party of Kenya (DAP-K) candidate Maurice Imbale against Imwatok who is the incumbent Makongeni Member of County Assembly who seeking to get re-elected for his third consecutive term on an ODM ticket.

Raila who is the ODM party leader warned Aladwa that if he campaigned for Imbale this may risk ODM going to the polls in a divided house which may even cost Aladwa and other aspirants vying on the party’s ticket in the Makadara constituency.

“You will have to correct that impression that you are campaigning for Imbale and redeem yourself and campaign for Imwatok as the Makongeni MCA. You should show the voters that as ODM we are one family,” said Raila.

At the same time, Imbale is threatening to demand Aladwa refund the money he gave him to endorse him in case the Makadara MP goes ahead and campaigns for Imwatok.

“I paid Aladwa to support me and if he goes against our deal, I will demand a refund of the cash based on breach of contract,” said Imbale.

Imbale also threatened to shift his support to Aladwa’s main rival Anthony Waithaka aka Anto of the United Democratic Alliance (UDA) if Aladawa fails to honour their agreement.

A source close to Raila also claims that Aladwa was warned to stop holding night meetings with the Nairobi UDA gubernatorial candidate and support the Azimio candidate Mr. Polycarp Igathe

Newer Post
Jubilee Party Gang Loots in Makadara’s Night of Terror
Older Post
Air Conditioners Are Not A Luxury, But A Necessity