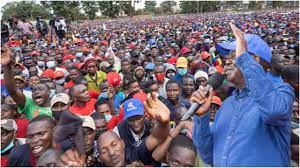 Azimio la Umoja One Kenyan politician, Raila Odinga, has said that he will host a meeting at the Kamukunji Grounds on Monday, January 23.

As per Dennis Onyango, his spokesperson, Odinga is anticipated to touch down at the Jomo Kenyatta International Airport (JKIA) at 11 a.m. on Monday in a statement to newsrooms.

After that, he will travel to the Kamukunji Grounds for a People’s Baraza with the general public to discuss new revelations by a whistleblower regarding the presidential election on August 9, 2022.

For the sake of the nation, Mr. Odinga is pleading with Kenyans to attend the Kamukunji Baraza in huge numbers.

The Azimio team claims that the results of the presidential election were tampered with to favor President William Ruto.

In the presidential elections in August 2022, Odinga received 8.1 million votes while Ruto received 5.9 million, according to Azimio. They credited the purported IEBC whistleblower for providing the information.

In December 2022, Odinga declared that the Azimio alliance will stage a number of anti-government demonstrations in response to the high cost of living, state judicial capture, dismissal of four IEBC commissioners, and unfulfilled promises by the Kenya Kwanza government.

The coalition was set to hold simultaneous Jamhuri Day celebrations in the Jacaranda grounds, the first of many protests they had planned across the nation.

Due to Odinga’s engagements elsewhere, the planned rally was postponed, according to ODM Minority Leader Opiyo Wandayi.

The coalition says that they will push for justice with fellow Kenya’s through public and private conversations with Kenyans.