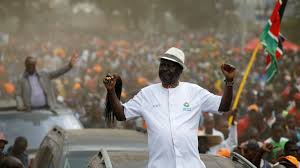 The head of Azimio, Raila Odinga, has urged his followers to oppose the Kwanza government in Kenya on the basis that the election results were falsified.

As he had promised his fans, Odinga gave a speech at the Kamukunji Grounds on Monday afternoon accompanied by his close political associates.

Along with calling for President William Ruto’s resignation for “inability to lead,” Raila also requested that the IEBC not be reconstituted.

They utterly reject the outcomes of the 2022 elections. They claimed that they do not recorgize Kenya Kwanza regime and is regarded as illegitimate. They insit on not  accepting William Ruto as Kenya’s president or any other person serving with him.

Raila commanded his supporters to chant “Ruto must go” as he declared, “We urge any attempts by Ruto to rebuild the IEBC commission to cease and enable Kenyans to do so after fair deliberations.”

He said that Wafula Chebukati, two IEBC commissioners, and the CEO “created a cartel” and manipulated the results.

Deputy President Rigathi Gachagua’s comments that he is the genuine soldier in the struggle for liberation were ignored by Raila.