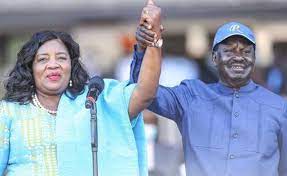 Agano presidential candidate David Waihiga Mwaure has unveiled a list of Kenyans which includes the wives of his political rivals to serve in his cabinet if he is elected president.

Speaking to the press on Thursday, July 4th 2022, Mwaure said his Party sent an appeal to Kenyans to help with the suggestions where the names of the Azimio presidential candidate Raila Odinga’s wife Ida Odinga and the Mama Rachel Ruto the spouse of Deputy president Dr William Ruto who is running for the presidency on a Kenya Kwanza alliance ticket.

“We have also said if Roots’ leader George Wajackoyah mends his ways, there is something he is trying to tell Kenyans. We can make him be in charge of the Cancer Center we want to develop,” he said.

“From the current cabinet, the name of Interior Cabinet Secretary (CS) Fred Matiang’i has been proposed, very strongly by more than one person. Also his Education counterpart Prof. George Magoh has been proposed,” he said.

He said the name of the Roots’ presidential running mate Justina Wamae has been proposed fiercely, adding that he had discussions about it with his running mate Ruth Mutua.

“Though they debated, they are good friends. We think she has something to offer Kenyans,” he added.

“For us, we shall allow them to serve both their Christian work and to serve their nation,” he said.

Mwaure insisted that the aforementioned names are simply proposals.

“We want to pass a disclaimer. We have not consulted these people. These are proposals.”