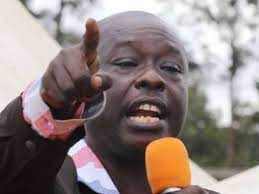 Following a dispute over house leadership, Deputy President Rigathi Gachagua has reconciled the Kericho County Assembly’s leaders. This comes after arguments in the County Assembly last week, when a viral video showed some of the Members of the County Assembly (MCAs) getting into a physical altercation. As a result, President William Ruto warned the leaders in a strong manner.

Acting at the request of President Ruto to resolve the issue, DP Gachagua emphasized that it was critical to find a solution since failure to do so would have a negative impact on service delivery and the county’s standing in the political matrix. Gachagua stated, that the president charged him with the duty of summoning the leadership of our nation for a meeting to resolve the problems underlying the conflict with a view to restoring normalcy.

He continued to state that “After consultations, we have zeroed down that the conflict stems from a struggle for people to lead and misunderstandings on the house leadership. The leaders have unanimously agreed that we amicably resolve all standing issues and we restore peace.” The second-in-command said that the leaders unanimously decided on the exact leaders who will fill the seats and agreed to hold an election to select their leaders. MCA Kamasian Currently, Aaron Rotich is the majority chief whip, Philip Rono is the majority leader, Phancy Chepkorir is the deputy majority leader, Bavina Serem is the deputy majority chief whip.

In addition, DP Gachagua advised leaders to settle disputes amicably rather than resorting to violence given the duties that they have been assigned by the populace. He insisted that when there are problems, the party’s processes should be there to help members resolve them without resorting to the humiliating situations they have seen here. The DP said that he will resolve the conflict in the Meru County Assembly by the next week.