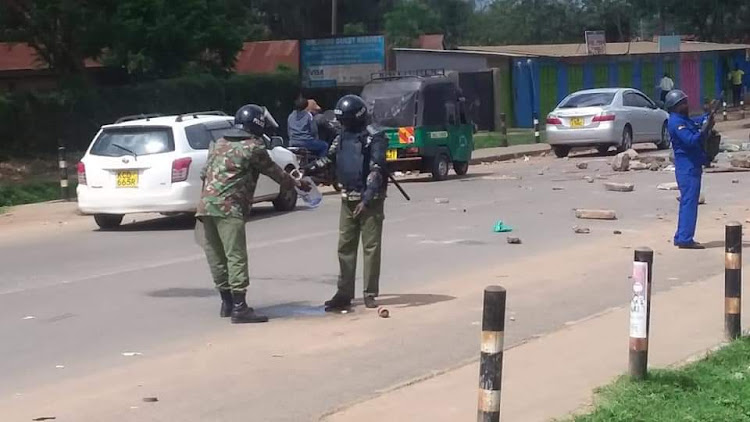 Constable Phillip Mulandi of Machakos prison died in hospital following an attack by the students who were protesting insecurity.

Mulandi According to Machakos police commander Issa Mohamed, Mulandi was walking to work on Wednesday morning when he came across a group blockading a road and tried to intervene and remove the boulders.

However, he said, as Mulandi bent to remove the barriers that had been erected the students saw a handcuff he had and raised alarm.

“They raised alarm and alerted their colleagues who joined and stoned him badly. By the time we arrived, he had been seriously injured. He succumbed to the injuries in hospital,” Mohamed said.

He added the warder was not in the anti-riot team that was trying to quell the protests.

The institution was closed indefinitely over insecurity and ongoing demonstrations.

Machakos University Vice chancellor Lucy Irungu made the announcement on Wednesday afternoon in a memo.

The move came hours after a student who had been shot by a police officer during Monday’s protests died on Wednesday morning.

“Due to the evolving insecurity situation around the university and the ongoing students’ demonstrations, a special meeting was convened on December 7.

“It resolved that in the interest of the security of staff and students, the university be closed with immediate effect,” the memo read.

All students were advised to vacate the premises immediately. The administration said further communication will be made in due course.

The university students went on a rampage for the third day on Wednesday protesting their colleague’s death.