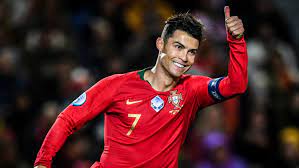 The Manchester United forward scored the opener from close range in the friendly at the Estadio Algarve.