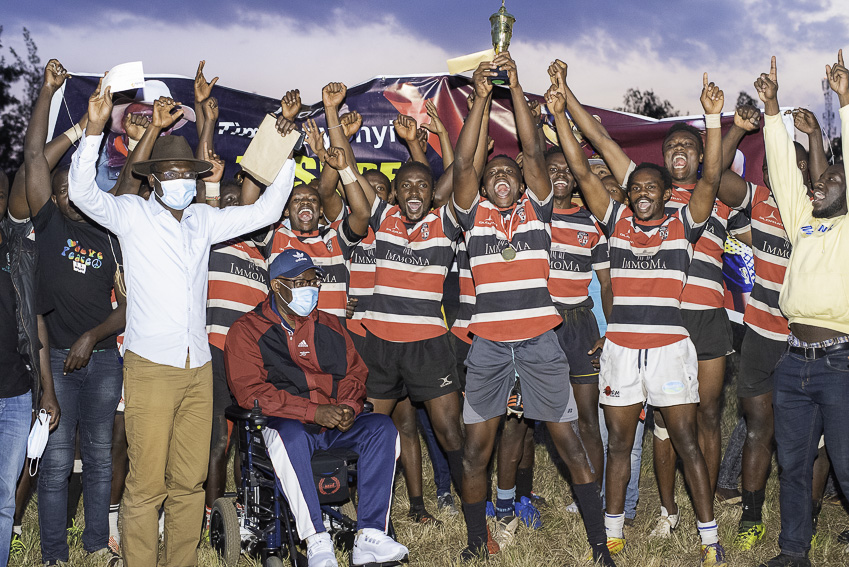 Runda 2  are the 2021 inaugural Tim Wanyonyi Rugby Sevens Super cup after edging out a resilient Mnyanga 7-5 in a pulsating final played at Garden Estate Secondary school.

Harmony Wamalwa who was feted as the most valuable player of the tournament touched down at the stroke of half time after a remarkable dummy and sprint from the half way line. He made a successful conversion to give his side a 7-0 lead.

Mnyanga Rugby rose from a slow first half and took the game to Runda 2 but the champions held off the early pressure. Mnyanga finally got the opening try after a scrum in Runda’s territory. Winger Johnson Wafula touched down in the final minute of the second half to reduce the scoreline to 7-5.

This set up a nervy final few seconds with Runda holding off to emerge as the first champions of the Tim Wanyonyi Rugby Sevens Super Cup.

Meanwhile Runda 1 staged a second-half comeback to beat Prisons 15-14 in the third place play off. Prisons had lost 30-7 to Runda 2 in the first semis while Mnyanga had emerged 12-10 winners against Runda 1 in the second semis.

Kennedy Wanyoike from Runda1 got the top scorer accolade.

Twelve teams participated in the one day tourney that was organized by Boaz Wangila.

Tournament sponsor Westlands MP Tim Wanyonyi commended the tournament organizers for a good job. He said that the tournament served as an important means of empowering the youth. He reiterated the importance Rugby plays in the society going ahead to laud the teams for an exemplary showcase of talent.

“Rugby brings people together by breaking down barriers.From cultural, class, gender or disability, rugby players usually have a strong bond. I urge fans to support this rugby outfits. We will organize more of such tournaments throughout the year to engage more youth,” Tim Wanyonyi said.

The preliminary matches and results were as follows: