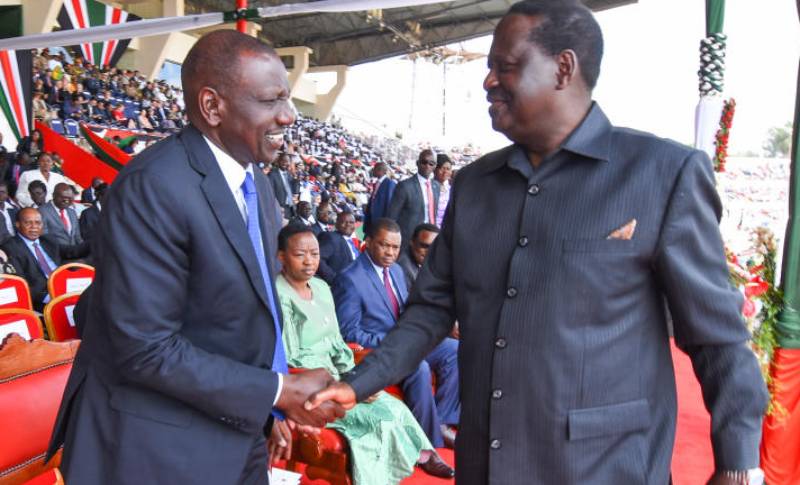 The poll shows that Ruto leads the race with 38 per cent followed by Raila whose presidential bid attracts 23 per cent support.

However, Raila  has gained significantly since June, according to an opinion poll released by TIFA Research on Friday, November 19th, 2021.

Almost a quarter of the 1,519 respondents in the TIFA poll reported that they were still undecided on who to vote for in the upcoming election.

The poll gives a similar result to one released on Thursday by Radio Africa Limited and published in the Star on Friday.

In its presentation, TIFA said that over the last 16 months, their surveys reveal several major fluctuations in Kenyans’ expressed preferences regarding their next president.

First, there was a steady decline in Raila’s rating between June 2020 and June 2021 (from 15 per cent to 8 per cent) but it has more than rebounded in the current survey (to 23 per cent).

“At the same time, over this entire period, DP Ruto’s ratings have been remarkably constant (within a range of just 4 per cent between 35 and 39 notwithstanding his almost constant campaign activities,” TIFA said.

The pollster added; “TIFA has taken note of the fact that since our last such survey in June 2021, a number of events have occurred relating to several of these issues and which therefore have likely affected public opinion.”

Ruto and Raila have in recent months escalated their vote hunting expeditions in the country holding huge rallies across the country.

Unlike Ruto who has indicated he will be in the race to succeed President Uhuru Kenyatta, the ODM boss will December 9 announce whether he will be a candidate in the next year’s polls or not.

The Tifa report also indicates that it is becoming clearer that Raila is perceived by the majority of Kenyans as the preferred successor by Uhuru.

A record 48 per cent of those polled said Uhuru has a soft spot for Raila as the person to take over from him when he retires, in June only 32 per cent believed Uhuru had Raila in mind for the top job.

During the same period, some 10 per cent of the respondents still believed Uhuru will ditch Raila and support Ruto.

The figure has shrunk by one per cent to nine per cent as of November 11.

“More than five times as many Kenyans assume that Uhuru prefers Raila rather than Ruto as his successor (48 per cent vs 9 per cent),” the report indicates.