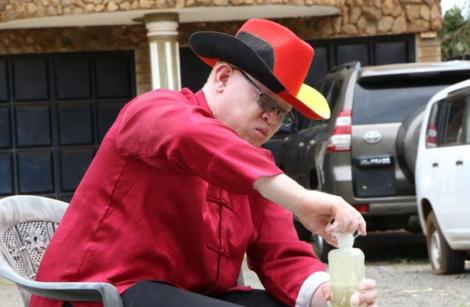 Expelled ruling Jubilee Party nominated Senator Isaac Mwaura returned to his normal duties at the Senate on Thursday, December 2nd, 2021, after seven months in the cold.

Mwaura returned to House after the Court ruled that he be reinstated back to the Senate terming his expulsion unlawful.

Last week, Justice Joseph Sergon ruled that the party’s National Disciplinary Committee process that led to his expulsion was unlawful and a violation of his rights.

Mwaura was among six senators Millicent Omanga, Naomi Waqo, Mary Yiane, Falhada Dekow and the late Victor Prengei expelled from Jubilee party early this year on allegations of disciplinary violations as per article 13 of the party constitution.

He was summoned by the party for disciplinary proceedings which ended with an expulsion recommendation by the party’s top organ the National Management Committee (NMC) but he vowed to challenge the move.

According to him, he did not trust the independence of the disciplinary committee arguing that the decision was not in good faith.

He however moved to the Political Parties Disputes Tribunal (PPDT) seeking to bar the Office of the Registrar of Political Parties (ORPP) from implementing Jubilee Party’s decision of removing his name from the party list, pending the hearing of his case.

But the tribunal threw out the request ruling that Jubilee had followed the due process in his ouster.

Unsatisfied with the ruling, Mwaura moved to court and obtained an injunction order halting any further step of his removal.

March this year, the High court temporarily stopped his expulsion. Following Jubilee’s decision, Mwaura at the time lost his seat following as Lusaka gazetted his seat vacant and the party then gazetted senator Sammy Leshore.

He then moved to the High Court seeking to have the execution of the Speaker’s decision overturned.

Last month, however, the court squashed the decision by the party to have him de-registered. The court concluded that Jubilee party’s national disciplinary committee processes and the decision that followed, were unlawful.