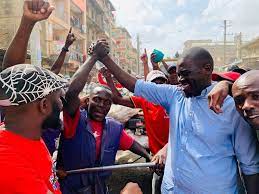 Sakaja Cleared by Tribunal to Run in Nairobi Gubernatorial Race

The Independent Electoral and Boundaries Commission (IEBC) Dispute Resolution Committee has cleared Nairobi gubernatorial aspirant Johnson Sakaja to contest for the seat at the August polls.

The tribunal sitting in Nairobi on Sunday, June 19, 2022 dismissed a petition that challenged the validity of his degree.

The committee said it lacks jurisdiction to determine the authenticity of the document.

“I’m glad that we have been vindicated, we stand qualified, we have the requisite qualifications to run for the office of governor of Nairobi,” Sakaja said.

A petitioner, Dennis Wahome, had told the committee in an affidavit that Sakaja’s Bachelor of Science in Management degree from Team University in Uganda was forged.

He wanted the senator’s clearance certificate issued on July 7, 2022 by IEBC revoked on grounds that he is not qualified to vie for the seat of governor.

The Elections Act makes it mandatory for a person vying for the seat of governor to be a holder of a degree from a university recognized in Kenya.

“We are in it to win so that we can transform this great city of ours,” he added soon after the verdict was delivered.

Sakaja is accused of forging a Bachelor of Science in Management degree certificate from Uganda’s Team University.

If a person is found guilty of forging academic certificates, he or she could face up to three years in jail upon prosecution.

The Commission for University Education (CUE) had asked the Senator to provide ten documents as proof of enrollment and graduation from Team University.

Sakaja is required to provide among others; A letter of admission from the university, a valid student ID, transcripts, evidence of course units taken, a graduation booklet with his name on it, and a photo of him in his graduation gown.

The Senator, who is to appear before the Commission on Monday, June 20 to aid in investigations is also required to show receipts of application and tuition fee and submit names of his lecturers during his study period.

But in his response, Sakaja said the whole degree saga was nothing but mischief and political interference.

“We are being persecuted. This is highly political and is coming from the highest office in Kenya,” Sakaja claimed.

He claimed the commissions’ members met with senior government officials at Jogoo House before asking him to provide the documents to ascertain his degree certificate.