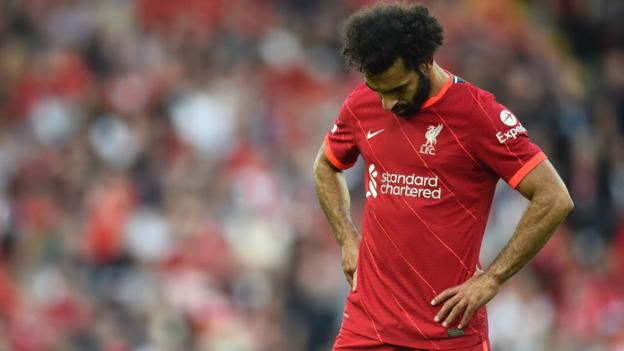 On loan Ademola Lookman came off the bench to consign Liverpool to a shock 1-0 defeat at Leicester after Mohamed Salah had a penalty saved on Tuesday, December 28th, 2021.

It was a miserable night for Jurgen Klopp’s side as they failed to close the six-point gap to Premier League leaders Manchester City and their wastefulness was to blame.

Lookman on loan from German Bundesliga runners up RB Leipzig, came off the bench, promptly exchanged passes with Kiernan Dewsbury-Hall, and beat Liverpool goalkeeper Alisson at his near post for Leicester’s all important goal. The home crowd erupted.

Ademola Lookman has scored in consecutive Premier League appearances for the first time in his career, with the attacker netting against Manchester City and Liverpool.

Salah’s first-half penalty was saved by the brilliant Kasper Schmeichel but he did not test the goalkeeper from the rebound and nor did Sadio Mane when through after the break.

Mohamed Salah missed only his second ever penalty in the Premier League. He had scored each of his previous 15 attempts from the spot before tonight.

Wilfred Ndidi, playing at centre-back, caught Salah inside the box and the Egyptian stood over the penalty.

Schmeichel was up to the challenge though, saving Salah’s tame penalty before the Premier League’s top scorer somehow contrived to head against the bar from the rebound.

Since the start of 2020, Kasper Schmeichel has saved more penalties in the Premier League than any other goalkeeper, with tonight’s stop his third in this period.

Liverpool are six points behind champions and league leaders Manchester City, who can extend that gap to nine points when they face Brentford on Wednesday, December 29, 2021.