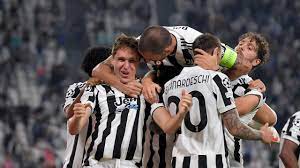 Juventus closed the gap to the top four in Serie A by beating relegation-threatened Cagliari 2-0 on Tuesday.

Moise Kean and Federico Bernardeschi scored as Juventus moved to within four points of Atalanta, who were surprisingly held to a 0-0 draw at struggling Genoa.

Atalanta were in fourth place and the final Champions League spot.

Juventus had struggled at the start of the season but things are starting to click under returning coach Massimiliano Allegri and they came into the match having won five of their past six matches, drawing the other.

Atalanta could have moved a point above Napoli and AC Milan before their games on Wednesday.

Genoa remained in the drop zone but inched to within two points of safety.

Salernitana’s match at Udinese was not officially postponed but could not take place because of a coronavirus outbreak at the visiting club.

Salernitana were blocked by local health authorities from traveling to Udine after at least two members of the team tested positive for COVID-19.