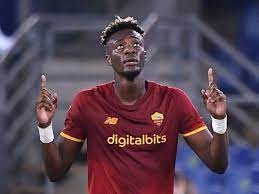 Serie A: Tammy Abraham Nets Twice for Roma to win at Atalanta

Tammy Abraham netted to give Roma an impressive Serie A win at Atalanta on Saturday, December 18th, 2021.

Abraham bundled home after just 57 seconds and smashed in Roma’s fourth to take his tally to 12 for the season.

Nicolo Zaniolo put Roma 2-0 in front then Englishman Chris Smalling scored just four minutes later and Abraham thumped in a first-time finish to move Roma up to fifth in the table.

Bryan Cristante’s own goal before half-time pulled one back for Atalanta, who also had a goal disallowed for offside.

Jose Mourinho’s side sit level on points with Juventus, who won 2-0 at Bologna thanks to goals from Alvaro Morata and Juan Cuadrado.

Morata slid in the opener at a foggy Stadio Dall’Ara after six minutes before Cuadrado doubled the visitors’ lead after the break to put Juventus sixth in Serie A.