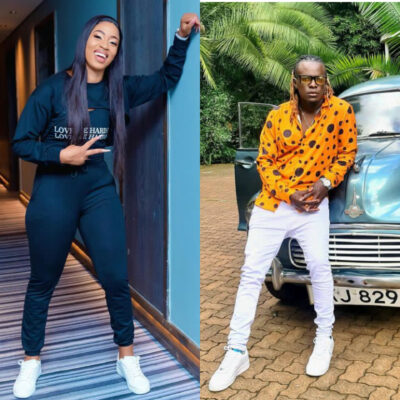 The social media has been up in a frenzy for the past few weeks after the content creator Diana decided to join the music industry when she released her music which caused mixed reactions on the internet.

Willy Paul (pozze) took the opportunity to mock her music and criticize Diana who is Bahati’s(singer) wife. He even released a song where he made lousy allegations about Diana of her life before she met Bahati.

It did not turn out well for Willy Paul as Diana responded to the allegations by accusing him of attempted rape in a 26 minutes long video on YouTube that was uploaded on Thursday 9th December 2021.

“I remember this day like it was yesterday..He came on top of me and started pulling my skirt up. He tore my skirt, tore my blouse…,”she recounted the incident being emotional.

The singer Willy Paul pointed out that the allegations were aimed at tainting his image and brand that he had built over the years.

Pozze took it to his Instagram where he said that the allegations were false and that he will seek legal help to ensure justice is served.

“We shall go to court and get justice. Every human has a right to dignity and that dignity must be protected. If we were charged for sexually assaulting our exes with whom things did not turn out as expected, who among us boy child would still have their freedom,” he said.

This has not been the first time that Willy Paul has been facing allegations against rape. The last case was with Miss P(singer) who had accused him of the same. He seems to be a lucky man as the court decided to take another turn.

According to the order issued by Senior Principal Magistrate D.W Mburu on December 29, 2021, Diana was also barred from making any more allegations about Willy Paul.

“It is hereby ordered that the defendant/respondent’s video and social media post posted on her YouTube channel titled My untold story, Willy Paul attempted to rape me, be pulled down pending the hearing and determination of this suit as it is prejudicing the plaintiff/applicant and making him lose business opportunities and making him suffer health-wise.

“That the defendant/respondent herein either by herself, her servants, agents, assigns or any other person spreading the video circulating the same is hereby restrained by an interim injunctive order of the court from defaming, spreading and continuing to defame the plaintiff/applicant pending the hearing and determination of the suit,” read the magistrate’s orders. 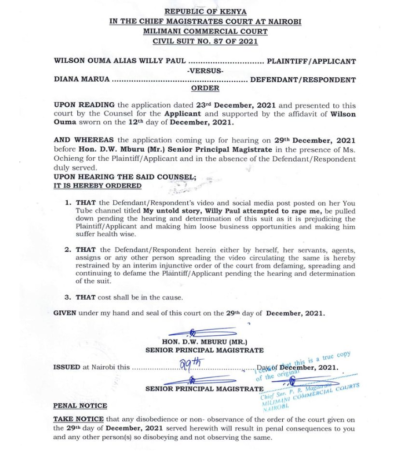 Newer Post
There Will Be No Fair Nominations In UDA,’ Wangui Ngirici Says As She Ditches The Party
Older Post
KNCCI boss Ngatia hot favourite in Nairobi’s governor race