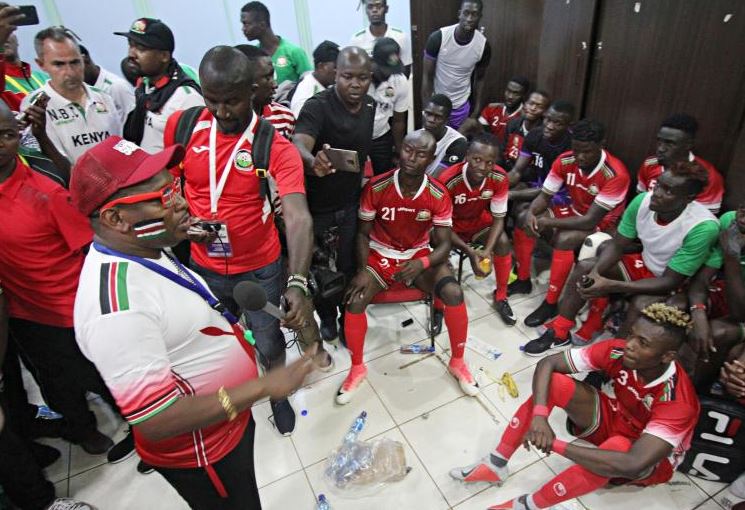 Sonko was reacting to a Facebook post posted by Arocho on the KPL Chat questioning the former Governor about Gor Mahia.

The former Governor who was expected to meet the Gor Mahia players after the team was locked of their training grounds at Camp Toyoyo astro-turf field said he could not make it because he was held up in court.

Arocho had challenged Sonko with the post in Facebook saying,” Mike Sonko please honour your pledge to Gor Mahia players, they can’t wait for you the whole day, yesterday and a good part of today. Kama haiwezekani waeleze wajipange.”

Sonko replied:“I was busy in court. I’m not the only Gor Mahia fan. Take your nonsense to hell.”

Gor Mahia which is preparing to battle AFC Leopards on Saturday, July 31st, 2021, in their BetKing Premier league assignment has been locked out of Camp Toyoyo for training due to non-payment of training fee.

Sonko has in the past supported Gor Mahia, AFC Leopards, and Harambee Stars among other teams.

Sonko has been very supportive to Gor Mahia in their financial problems and even recently while hospitalized at Nairobi Hospital bailed out the Premier League champions by salvaging their trip to compete in the CAF Confederations Cup with air tickets.

In February, this year, Gor Mahia’s trip to Zambia to play their Caf Confederation Cup fixture against Napsa Stars was on the verge of collapsing until ex-Nairobi governor Mike ‘Sonko’ Mbuvi stepped in to bail them out.

The Zambian trip was surrounded by drama though, with Gor’s management reportedly unable to afford air-tickets to the Zambian capital alongside accommodation fees for the traveling contingent.

Kenyaonlinews.com can exclusively reveal the team was on the verge of not honouring the return leg at National Heroes Stadium in Lusaka as they did not have money to purchase tickets for the trip.

It is the reason their first attempt to fly out earlier collapsed as the club was yet to secure air tickets.

In recorded audio obtained by Kenyaonlinenews.com of ‘Sonko’, who was then admitted at a Nairobi hospital, speaking to the club’s chairman Ambrose Rachier after he gave the team USD5,000 to secure tickets for the trip.

“I am still admitted at a Nairobi Hospital but was upset to hear my beloved team is stranded and yet to travel to Zambia for the Caf fixture,” ‘Sonko’ told Rachier in the recorded conversation.

“I have been told by one Brian the team is stranded so I have decided to give some little support, at least USD5,000 to make sure the team travels, and I hope the money reached you,” ‘Sonko’ explained to Rachier, who responded by saying he had indeed received the money.

“You know me I am a Gor Mahia fan, and I don’t like seeing the boys suffering or getting stranded anywhere and Brian is a very good friend to me, he is like a brother to me? ‘Sonko further told Rachier.

In his response, Rachier thanked ‘Sonko’ for helping the team, and wished him a quick recovery.

“We appreciate your support and as a club, we are praying for your quick recovery.”