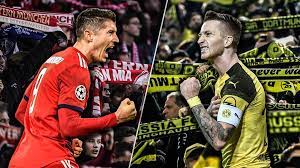 Bundesliga’s “Der Klassiker” will be a top-of-the-table clash that football fans will be looking forward to. Particularly for Bayern fans, given that a win for the league leaders could see them officially clinch a staggering tenth consecutive Meisterschale and what a better way to be crowned Bundesliga champions than to beat your closest rivals in front of your home fans with four matches to go.

Bayern Munich against Dortmund is a rivalry that has dominated German football. Since 2010, the Bundesliga winners have either been called Bayern Munich (10 times) or Borussia Dortmund (2 times).

Ahead of Saturday’s match in the Allianz Arena, Bayern have a nine point lead with four matches to play and a victory will see Bayern lift their 10th Bundesliga title in a row.

Football fans can also expect a close 2022 Copa del Rey final with Real Betis led by seasoned manager Manuel Pellegrini seeking a famous season as they are also in a fight for a top-four position in La Liga, currently sitting fifth in the table, three points behind fourth-placed Sevilla, with the team bidding to claim a top-four spot in the top flight for the first time since 2005.

Valencia on the other hand are eight-time winners of the Copa del Rey, last lifting the trophy in 2019, beating Barcelona 2-1 in the final of the competition in Seville, while they have been runners-up on a further nine occasions.

“Our subscribers have a rich football menu this weekend Der Klassiker and the Copa del Rey final are huge fixtures for the fans and we are equally looking forward to broadcast the same live. Subscribers will therefore be in a position to enjoy all the action at the comfort of their homes,” said StarTimes Regional Marketing Director Mr. Aldrine Nsubuga.