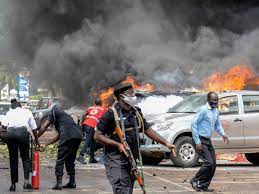 As Kenyan terrorist suspects escaped from prison, Ugandan capital Kampala was attacked by suicide bombers, killing at least three people and injuring more than 30 others, in twin attacks on Tuesday, November 16, 2021.

Three attackers on motorbikes blew themselves up near parliament and the city’s police headquarters.

The number of dead is likely to rise, with the blasts leaving body parts strewn in the streets.

Officials blamed the attacks on the Allied Democratic Forces (ADF), an armed group based in the DR Congo

The group has not yet commented.

The attacks came within three minutes of each other. More bombs have been found in other parts of the city, officials said.

“We believe there are still more members of these domestic terror cells, especially the suicide bomb squad that has been created by the ADF.”

A fourth attacker has been arrested and an explosive vest recovered, police said.

Two policemen were among the dead. Thirty-three others were injured in the blasts, including five critically.

Proceedings in parliament were called off and MPs advised not to come to the building following the attacks.

Cars parked near parliament went up in flames, while the explosion near the police station shattered windows.

“A booming sound like that from a big gun went off. The ground shook, my ears nearly went deaf,” Peter Olupot, a bank guard who was close to the attack near parliament, told Reuters news agency.

Police said the attacks were carried out by a “domestic terror group” linked to the ADF.

The group formed in the late 1990s in opposition to Uganda’s long-serving President, Yoweri Museveni. In recent years, its attacks began to be claimed by the Islamic State group.

This is the second suicide attack that the authorities have blamed on the ADF.

Last month several people were injured when a suicide bomber blew himself up in a bus near Kampala.

In another attack last month, a 20-year-old waitress was killed after a device, left in a shopping bag, detonated in a bar in the city.

It killed 74 people in an attack on a restaurant and a rugby club in Kampala in 2010.

A dangerous fusion of domestic militancy and global extremism is threatening Uganda’s security.

The ADF has been co-opted in recent years by IS – and this is the biggest attack it has been linked to in Uganda since they established relations.

The ADF is also known as the Central Africa Province of the Islamic State. An Islamist group in Mozambique uses the same name – and it is waging a brutal insurgency there.

The militants know their way around and can blend into the local population. IS provides them with tactical support, helps wage their propaganda campaign – and has given them a new mission.

Regional intelligence and security agencies will have to work more closely together to combat the threat, and the public will have to be more vigilant.