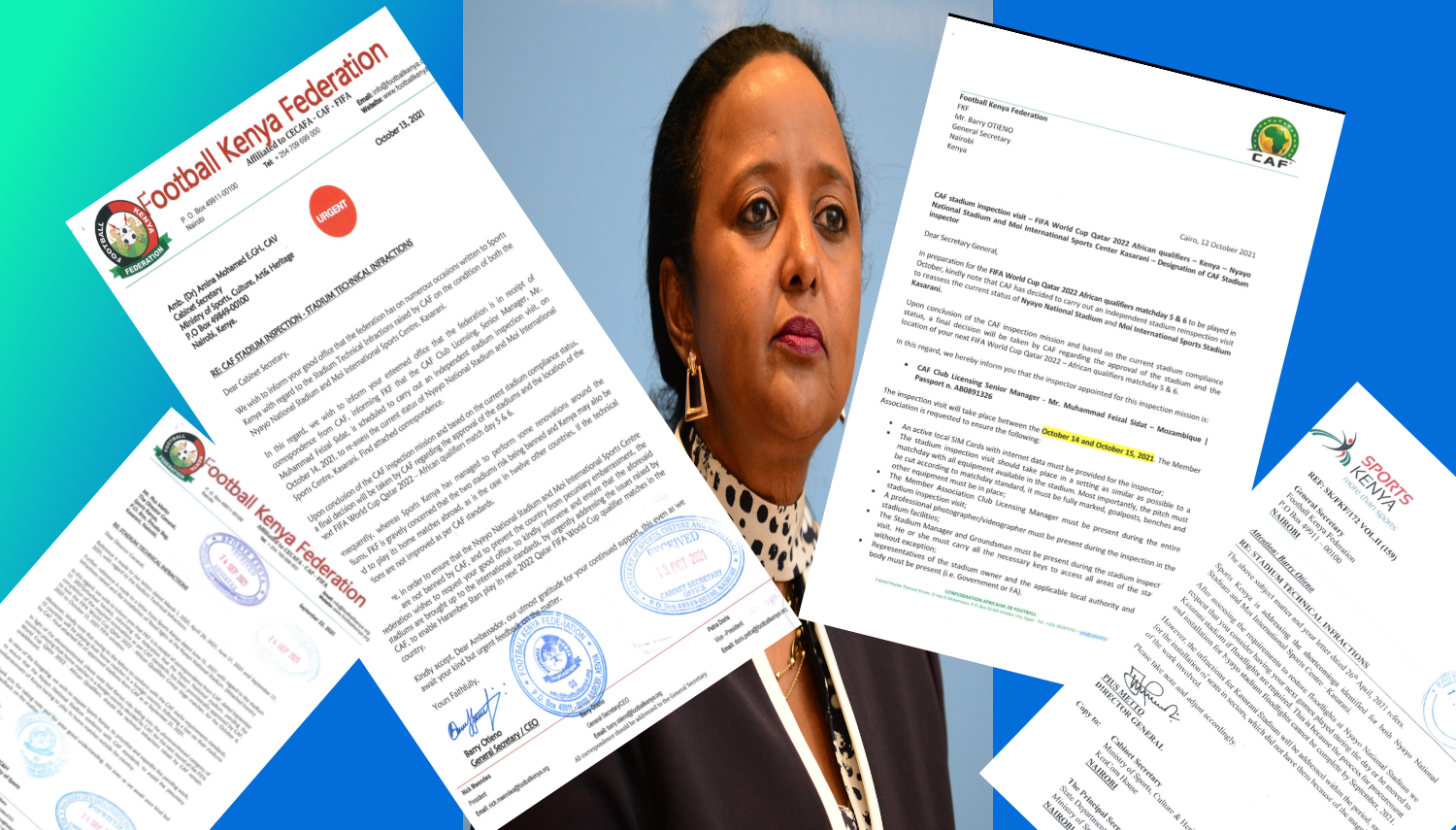 Cs Amina Mohammed, Ps Okudo not at all surprised by FIFA/CAF ban

On Friday the 29th of October 2021 ,FIFA and CAF banned kenya’s two national stadiums from hosting international matches. The two being Moi Sports Centre Kasarani(Misc) and Nyayo national stadium, both in Nairobi.

To many this came as a surprise.

Most Kenyans wondering how Nyayo stadium was deemed substandard and unfit to host international matches. This despite the so much hyped I billion shillings renovation at the facility, a process that took over 3years to complete, only to come out short of international standards.

To the Kenyan public and lovers of the game, this is a surprise move, a decision that they can’t fathom given the amount of taxpayers money pumped into the project.

However to the Cabinet Secretary of sports Amina Mohammed and her Ps in the ministry, Joe Okudo the move by the world body to ban kenya’s two national stadiums didn’t come as a surprise.

According to documents in our possession, it is clear beyond reasonable doubt that the duo knew well in advance the imminent probability of the ban. It was a ticking time bomb.

FIFA and CAF had as early as last year written to the federation highlighting their areas of concern as regards to the standard of the venues. And as would be required of the federation, every letter received in regards to these was paraphrased to the ministry of sports.

On 13th of October FKF wrote to the CS for sports and culture informing her of CAF’s decision to send Mr. Feisul Mohammed as an independent evaluator to assess both Nyayo and Kasarani.

In spite of the federations spirited attempt to have Amina and her people to act and atleast make the modifications required at the stadiums more so at Nyayo stadium, which CAF had temporarily approved to host matches, the ministry however went quiet no action whatsoever for the whole period the danger ban hang on our heads as a nation.

It is not until 24th of October 2021, that Amina, Okudo and the ministry of sports were jerked into action, after learning of the arrival of a CAF independent evaluator.

Inside sources claim that the arrival of Mr. Mohammed Feisul was more of a last nail to the coffin of Nyayo and Kasarani’s fate. And Amina knew this all too well. But instead of acting appropriately to atleast avert the looming danger, Amina surprisingly decided to initiate an audit on Football Kenya Federation accounts.

In total disregard of the possibility of Harambee stars having to play their home match upcoming world cup qualify game against Rwanda in kismayu, or Gor Mahia and Tusker having to travel north or south of east Africa in such of a fit international stadium to host their caf matches.

As if unbothered, Amina and Okudo who had sufficient information chose to channel their efforts to try and discredit the federation on allegations of funds misappropriation. A move that was seen a heat cushion to try and divert attention from what awaited them. The tough questions on how yet the duo a whole over 1billion shillings was used to renovate and eventually come up with a floodlights less, substandard stadium only fit to host Members of Parliament matches.

The happenings of the past couple of weeks begs the question is Amina Mohammed, was she really the fittest match for the loved by many sports ministry, does she really understand what football means to millions of kenyan’s, fans and more so players. BUT of even more importance does Amina Mohammed really understand what it means to be slapped by a FIFA ban, not just to the stadiums but as a country?? Does she ….??