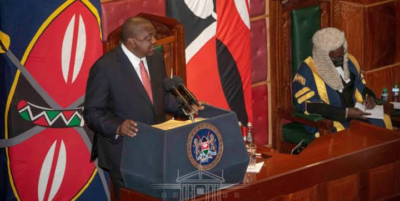 Today 30th November 2021 at the parliament, the president addressed state of the nation.

It is his 8th address to the nation during his term as the president of the republic of Kenya. The president is set to leave the office in 2022 after elections.

COVID-19 pandemic has really affected the economy which Kenyans anticipated him to talk about among other things as new COVID-19 strain Omicron classified a virus of concern.

In line with the constitution of 2010, he is to address state of economic development, the social structure and state of nationhood.

Among those who attended includes the deputy president William Ruto, ODM party leader Raila Odinga, the CJ among other leaders. Marakwet Senator Kipchumba Murkomen alleges that pro-Uhuru allies were plotting to keep out politicians who support Deputy President William Ruto.

The president addressed a lot of things that includes the following as summarized.

His Excellency praised Kenya Meat Commission for collecting Sh1 million daily from Sh8,000 daily before being taken over by KDF.

President Kenyatta said the port of Lamu is the only post-colonial sea port in Africa built and financed by an African government. All other major sea ports were built when most of Africa was under colonial rule.

The president celebrates that more Kenyan households were connected to electricity than South Africa and Nigeria combined.

President Kenyatta rules out another lockdown over new Omicron variant.

Uhuru pointed out that Kenya is now 6th wealthiest African nation from 12th in 2012. GDP grew from Sh4 trillion to Sh11 trillion.

The European Investment Bank will open a regional hub in Nairobi, its first outside Europe, that will serve 11 African countries and place Nairobi as an international financial centre.

President Kenyatta says a Kenyan company in Kilifi county became Africa’s largest producer and exporter of vaccine syringes during the Covid period, it exported 70 million syringes to over 20 countries globally

Uhuru lauded KRA for exceeding their limit and collecting tax beyond the set target.

He pointed that Kenya’s real GDP recorded a phenomenal 10.1% growth during the second quarter of 2021; the highest growth ever recorded in one quarter in Kenya’s history and also the first time Kenya has hit a double-digit growth number.