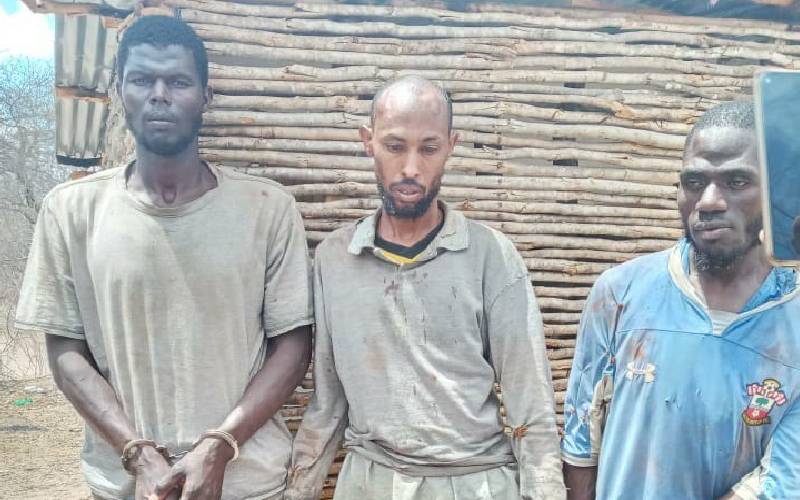 Three convicted terrorists who escaped from Kamiti Maximum Prison have been arrested in Mwingi, Kitui county.

The three, Musharraf Abdalla, Joseph Juma and Mohammed Abdi were nabbed  on Thursday, November 18th,  at Endau Location in Kitui East as they headed to Garissa en route to Somalia.

An image of them in handcuffs was immediately circulated.

They escaped on November 15 from Block A 6 where they had been held.

The Directorate of Criminial Investigations (DCI) boss George Kinoti confirmed the arrest and added they were being brought to Nairobi.

Endau, in Kitui East, is about 250 kilometres from Nairobi.

From Kamiti Maximum Security Prison via Thika to Matuu and on to Kitui, it would have taken the convicts five hours to reach Endau by car

If they were walking non-stop, and covering four kilometres an hour, they would have got to Endau within three days

The town is 88 kilometres from Kitui Town.

The escape led to the arrest of 13 wardens and major changes in the Kenya Prisons.

On Wednesday, November 17th, 2021, President Uhuru Kenyatta revoked the appointment of Wycliffe Ogallo as the Commissioner-General of the Kenya Prisons Service, following news of the escape.

Ogallo has been replaced by retired Brigadier John Warioba who was sworn in immediately.

The DCI had placed a Sh60 million bounty on their recapture.

It is not clear if someone will get the bounty for the arrest of the three.

The three convicts Musharaf Abdalla, was convicted of attempting to attack Parliament in 2012; Joseph Juma Odhiambo, who was arrested in 2019 at the border between Kenya and Somalia for planning to join the terror group al-Shabab; and Mohamed Abdi Abikar, was jailed for his role in al-Shabab’s attack on Garissa University in April 2015. That attack killed at least 148 people, most of them students.

Newer Post
Fugitives captured in Kitui after a three day run
Older Post
Ignorance lands DCI George Kinoti in trouble, he is expected to serve a sentence in prison