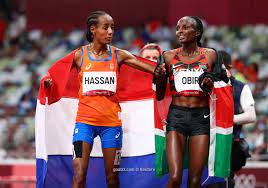 Sifan eyeing to win a treble of gold medals at the Olympics, began her ambitions positively by winning in 14:36.79 to begin a campaign to win two more of the same at these Tokyo Games.

With 800 meters to go, six women were still contending for the podium, playing into the hands of those with the most finishing speed. Hassan immediately moved into third as the bell sounded and didn’t wait to move to the front, passing Oribi with 250 meters remaining. She gapped the rest of the field and had the win decisively in hand in the final 50 meters.

“The race was slow, nobody wanted to go in front,” Obiri said. “I know that Sifan is good over the final 400 meters and I tried to hold her, but there was nothing I could do. I tried my best.”

Although she was substantially behind the rest of the field by the time she was back on her feet, she stormed back and ended up winning the heat in 4:05.17.

“I used all my energy this morning [in the 1500 meters] and I was kind of tired,” Hassan said after winning the 5,000 meters. “It was terrible when I tripped. I felt terrible afterwards and I never thought I am going to be Olympic champion.”