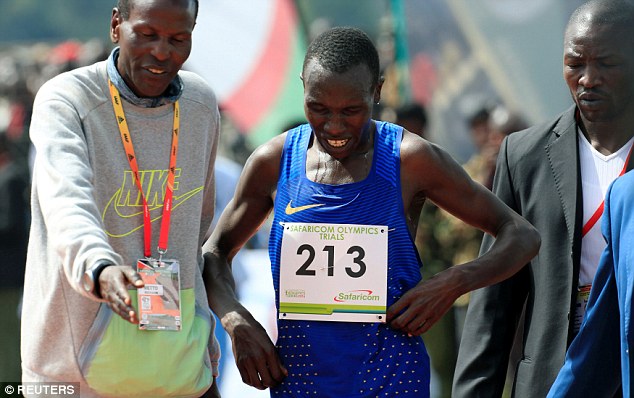 Tokyo 2020: Kamworor Ruled out of Olympics

Four times World Half Marathon champion Geoffrey Kamworor has pulled out of the Tokyo Olympic Games on the eve of the event due to an ankle injury.

The four-times World Cross Country winner had been involved in a minor accident last year after he was hit by a speed motorcycle while training in Eldoret, sustaining knocks on his head and ankle.

Kamworor, a former World Half Marathon record holder, had resumed full fitness winning storming to victory at the national trials just over a month ago.

The development comes as a massive blow for the athlete who was eyeing his maiden Olympic medal.

“This is the only medal I am missing in my career and Tokyo provides an opportunity for me to attain that. I am very happy, especially with the time we achieved today. It shows with a little polishing we can make it in Tokyo,” said Kamworor upon winning the Kenyan trials at Kasarani Stadium.

He was set to team up with Rodgers Kwemoi and Weldon Kipkirui in the 25-lap race at the Tokyo Games.

The 28-year-old impressed at the Kenyan championships last month, running in a time of 27 minutes, 1.06 seconds to secure his Tokyo qualification.

It was the fastest time set in Kenya over the distance.

Kamworor’s performance also signaled his return to top form following his injuries last year from an accident when he was hit by a motorcycle while out training.

“It’s sad that I am out of the Olympics. This problem started two weeks ago when doctors found out that there was a lot of pressure in my knee. An x-ray screen showed that I had sustained a stress fracture. I am disheartened that I will miss the Olympics. I will live to fight another day,” said Kamworor.