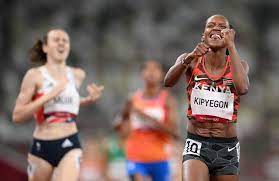 Kipyegon broke the 33-year-old Olympic record set by Romanian Paula Ivan at the Seoul Games as she clocked 3min 53.11sec.

Hassan came into the race as the newly-crowned 5,000m Olympic champion, a first of what she had hoped would be a hat-trick of golds. She also plans to compete in the 10,000m on Saturday.

Ethiopian-born Hassan, 28, led for most of the race but Kipyegon stayed right with her, never allowing the Dutchwoman to widen the lead.

As they came towards the penultimate bend, they were running almost shoulder to shoulder. Kipyegon soon found another gear, streaked past her rival and never looked back.

As the race entered its last stretch, Hassan began to fade and that opened the door for Muir who pushed past her to finish second with a time of 3:54.50, a national record.