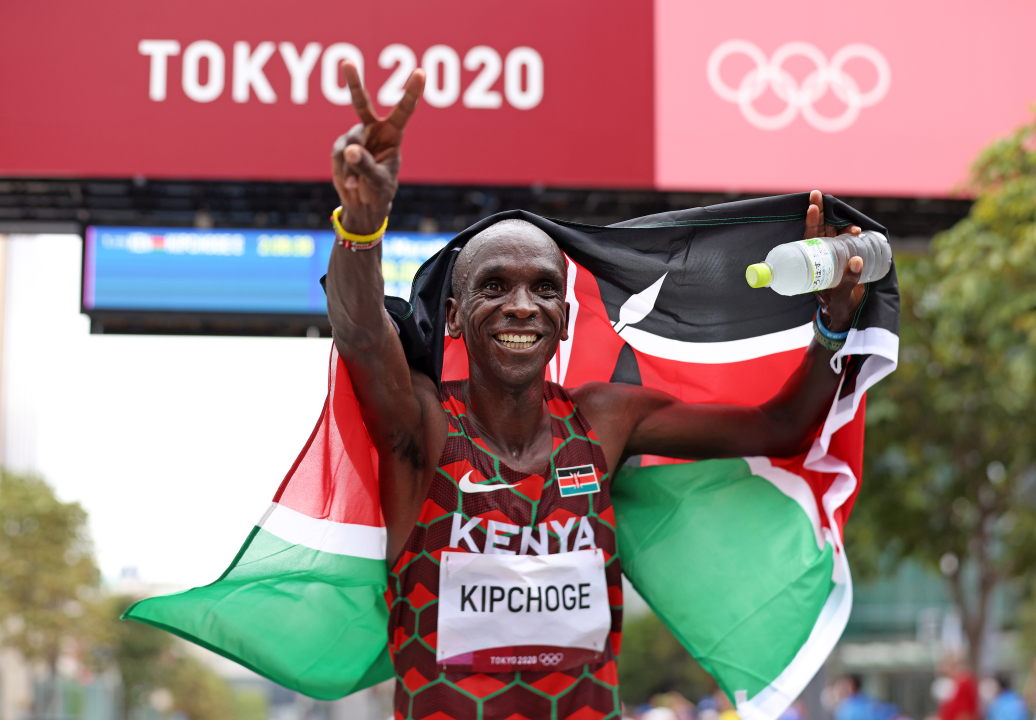 Kenya’s Eliud Kipchoge won the Olympic men’s marathon claiming his second straight gold medal and cementing his place among the all-time greats of the sport with a commanding performance in Sapporo, Japan on Sunday, August 8th, 2021.

Kipchoge finished in two hours, eight minutes and 38 seconds, holding up two fingers as he crossed the finish line.

The world record holder has now won four Olympic medals overall, having also taken silver in 2008 and bronze in 2004 in the 5,000 metres.

Eliud Kipchoge defended his marathon gold medal with an imperious display on the streets of Tokyo.

The first in a string of heartbreaks came when Shura Kitata, winner of the London marathon last year, dropped out with an apparent strain just before 10km.

Kipchoge showed why he was the man to beat going into Sunday’s race when he took full control as he pushed ahead of the pack after the 30 kilometre mark.

By the 35km stage he had jumped out to a lead of 27 seconds from a virtual tie 5km earlier and extended it to one minute and 17 seconds by 40km.

The 36-year-old Kenyan pulled clear with 10 kilometres to go to finish a full 80 seconds ahead of the Netherland’s Abdi Nageeye, crossing the line in 2:08:38.

There was drama in the sprint for the rest of the podium places however, as Nageeye and Belgium’s Bashir Abdi pipped Kipchoge’s compatriot Lawrence Cherono on the home straight.

Having pulled ahead, Nageeye turned to wave Abdi on to bronze before the pair embraced Kipchoge.

As in the women’s marathon yesterday the stifling Tokyo heat unsettled many athletes but the world record holder cantered home smiling and waving, seemingly capable of running it all over again.