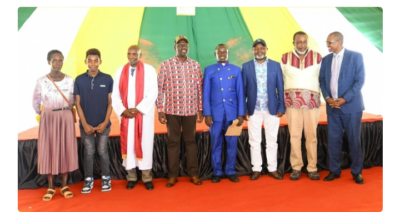 Meru pastor Peter Machiuka who travelled for more than 270km just to deliver a prophecy to deputy president William Ruto arrived at his home in Karen.

Bishop Machiuka of Harvest Christian Church said he had received a message from God for the Dp and embarked on a prayer walk from Igembe North in Meru County to Nairobi just to deliver it in person.

As per the pictures shared by the Dp’s communication team the pastor had been accompanied by another pastor from his church, they met him on Monday, 8th November.

According to Dennis Itumbi (blogger), the pastor left the congregation at Ruto’s office in tears after narrating his story. He delivered the message and prayed for him. However, the message was not revealed as it is considered top-notch secret. 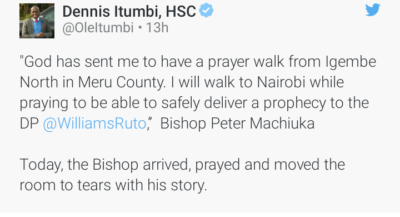 Earlier on Saturday,6th November, Machiuka had said that he was planning to camp at the Dp’s residence or office until he gets to tell the top secret prophecy.

“God has sent me to have a prayer walk from Kamweline Village in Kabachi, Igembe North in Meru County. I will walk to Nairobi while praying as instructed by God and to be able to safely deliver a prophecy to Dp Ruto,” Machiuka said.

At the same time he said he had also been instructed to pray for President Uhuru Kenyatta and the Country at large ahead of the 2022 elections.