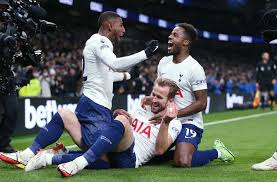 Tottenham Hotspur pipped Arsenal into next season’s Champions League after a 5-0 win at already-relegated Norwich secured fourth place ahead of Arsenal.

Tottenham started the final day fourth in the table knowing they only needed a draw to qualify for European football’s elite club competition.

But Antonio Conte’s side eased to a comfortable win at Carrow Road as Heung-Min Son scored twice in the second half to share the Golden Boot with Liverpool’s Mohamed Salah as they both finished on 23 goals.

Dejan Kulusevski also scored twice either side of Harry Kane’s header to ensure Tottenham will return to the Champions League for the first time since the 2019/20 campaign.