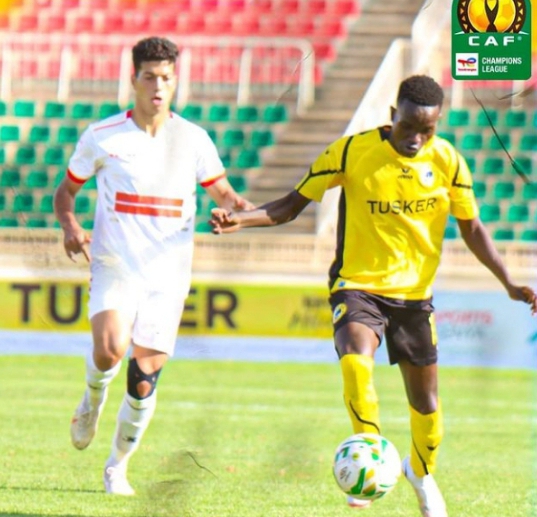 Tusker fall to a solitary Zamalek goal at Nyayo stadium

The attacker found the back of Brian Bwire’s net in the 47th minute with a deft loop over the advancing custodian.

Tusker head coach Robert matano had named a strong squad to face the Egyptian giants, with Kenyan international Brian Bwire being preferred between the sticks ahead of former st George’s goalie, Patrick Matasi.

Boniface Muchiri and Shami kibwana started on either side of Joshua Ibrahim, in Matano’s attacking trio lay out.

Humphrey Mieno, John Macharia and an impressive on the afternoon, Clyde senaji were tasked with the midfield role.

Skipper Eugene Asike, Hillary Wandera, Daniel sakari and Kalos Sirenge were tasked with the rear guard duties infront of Bwire. A task they lived up to, to perfection in the opening 45minutes as the match went into an 0-0 halftime break.

Matano hoped to atleast build on the momentum and the rhythm they had exibited much of the first half but come the second half , Bencharki had other ideas as early as the 46th minute he created a chance out of nothing after racing to a some what “wasted” long pass, racing into the area before beautifully laying a cut back the path of Saifel Giziri whose equally sweet effort cannoned off a well beaten Bwire’s wood work.

The brewers living dangerously early on the second half, and a couple of minutes later there was no denying Bencharki, as the Moroccan international raced to another pass inside the area , did well to loft the ball past an advancing Brian in the near post for the only goal of the match.

Boniface Muchiri should have pulled the brewers level deep into stoppage time but his low drive from outside the area went agonizingly wide past a beaten M. Abo Gabal for a Zamalek goal kick.

Tuskers best chance for goal gone and so was the time for any more action on the day, as the centre referee blew for the fulltime whistle.

The White Knights will now take their massive away goal advantage back to Cairo where they will host the Kenyan champions in a couple of weeks. The aggregate winner of the double legged contest will proceed to the lucrative group stage of the CAF champions league.