Tusker FC this afternoon 28th November,2021, tussled with Tunisian side of CS Sfaxien for their first leg of the Confederation of African Football (CAF).

The match which took place at the Nyayo national stadium at 1500h was a game that saw the two giants tussle the grass for no avail only managing to draw, 0-0.

Tusker player Wandera got away with an elbow injury in the second half.

Jimmy Mbugua missed the game as he had picked up an ankle injury in the game against Kariobangi Sharks.

Despite Tusker FC being boosted by defenders Charles Momanyi and Kalos Kirenge as well as midfielder Clyde Senaji returning to full training they only managed to scoop a point.

The second leg match is set to be on 5th December 2021 at 1600h between Tusker who are 12th at the Premier League (Kenya) and CS Sfaxien who are 2nd in Ligue Professionelle 1(Tunisia). 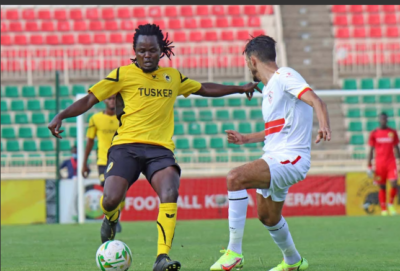