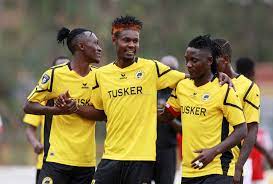 The brewers bowed of the competition on a 5-0 aggregate to Egyptian giants Zamalek SC in the second leg of the first-round match played at Borg El Arab Stadium in Alexandria.

Ibrahim Obama a product of Zamalek’s youth system scored a brace as El-Gezeiry and Egypt Premier League Most Valuable Player (MVP) Achraf Bencharki scored a goal apiece to propel the five times African champions to the group stages of the 2021-2022 Caf Champions League.

They will be grouped alongside one of the winners of the ongoing first round which will progress on Saturday.

Tusker headed into the match behind last weekend’s 1-0 defeat to the Egyptian champions in Nairobi and needed a win to progress.