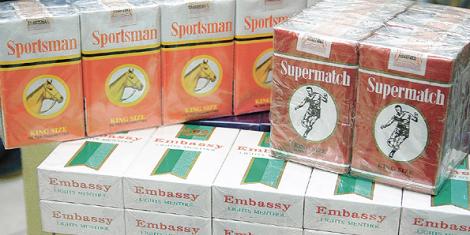 Two people have been charged at Nakuru Law court for being in possession of contraband cigarettes and counterfeit Kenya Revenue Authority (KRA) Excise stamps.

The suspects, John Gitau Kamau and Benson Kamau Mburu were arraigned before Principal Magistrate Isaac Orenge to answer to three counts of charges.

In the recent past, some of the Taxpayers have resorted to affixing counterfeit Excise stamps on excisable goods such as bottled drinking water, alcoholic beverages and cigarettes with a view of evading payment of excise duty and smuggling of uncustomed goods through porous borders to avoid paying custom duties.

This act of dealing with uncustomed goods and counterfeit KRA Excise stamps is a deliberate fraud scheme to defraud the Authority of Customs duties. These forms of tax evasion deny the government the much needed revenue to facilitate its service delivery. It is for this reason that KRA has embarked on a full scale investigations and prosecutions of tax evasion or gross negligence involving all Acts of Parliament administered by KRA in order to promote voluntary tax compliance.

The accused persons are liable to imprisonment for a term not exceeding five years or to a fine equal to fifty percent of the dutiable value of the uncustomed goods involved, or both if convicted.