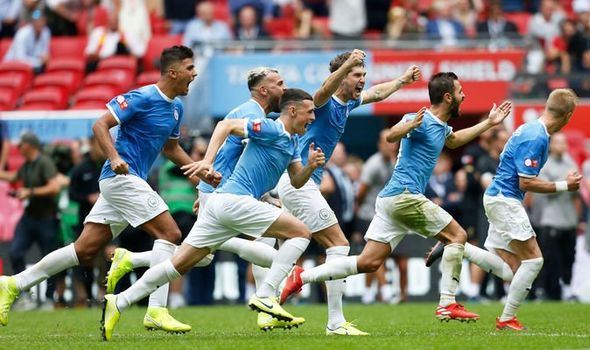 Manchester City underlined their status as Champions League favourites with a ruthless 5-0 thrashing of Sporting Lisbon to effectively book their place in the quarter-finals.

City, runners-up last season, blew Sporting away with a rampant first-half display at the Jose Alvalade Stadium as they became the first side in the competition’s history to lead by four goals at the halfway point of a Champions League knockout game.

The rout began when Riyad Mahrez turned home a Kevin De Bruyne cut-back (7), with VAR overturning the initial decision to rule the goal out for offside following a lengthy check.

Bernardo Silva, one of four players in the City team to have previously played for Sporting’s bitter rivals Benfica, then doubled their lead with a stunning half-volleyed finish which crashed into the net off the underside of the bar following a corner (17).

The hosts, in the last 16 of the Champions League for only the second time in their history, could not get to grips with City’s speed and movement and the punishment continued when poor defending allowed Phil Foden to fire home from Mahrez’s low cross (32).