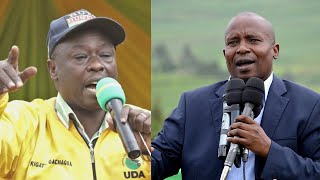 Gachagua made the claims at a political rally in Tharaka Nithi on June 2 and praised the lawmaker for turning down the hefty bribe.

According to Gachagua, the decision to turn down the bribe from the head of state convinced Kenya Kwanza bigwigs to have Prof. Kindiki oversee the elections.

Without providing evidence, Gachagua stated: “This professor (Kindiki) was called by Uhuru Kenyatta and was asked to be given money to turn on DP Ruto but he refused. We decided that this election will be overseen by a person who could not be bought.”

Explaining their relationship after Ruto settled on the Mathira MP to deputize him instead of Kindiki who was preferred by majority of UDA MPs, governors and senators, Gachagua stated that they enjoy a close friendship and unanimously agreed that he (Gachagua) should deputize Ruto in the August elections.

The Mathira lawmaker said that if it were possible, he would split the running mate slot and share it with Kindiki.

“Professor Kithure Kindiki and I are like a ring and a finger. We are friends from way back. These were children of the same further but there was only one slot and could not be divided. If it was possible, we would divide the DP seat for Kindiki and me.

“Professor Kithure Kindiki is my friend and together with Ruto, we have agreed that we will look after him and he will be a great person in our government,” he added.

Ruto who was in attendance promised to give the Tharaka Nithi Senator a senior position in his administration should Kenya Kwanza win the August 9 contest.

“Prof Kithure Kindiki is the real hero. We had a plan and the professor, as well as Rigathi Gachagua, were front runners for the Deputy President. But we agreed I and Gachagua, since we are older, agreed that the professor will get after us,” stated Ruto.

On his part, Kindiki appealed to his home turf to embrace the Ruto-Gachagua ticket and give them “an army for bringing development” by voting six-piece in favour of UDA candidates.

“Our candidates should get votes from MCA to Governor to create an army for bringing development,” stated Kindiki.