Ulinzi Starlets defeated Thika Queens 11-10 to lift the first edition of Women Super Cup in a match played today at the Utalii Grounds.

Maureen Shimuli was star of match, saving two penalties and scoring one herself to aid her side to the win.

The win was a morale booster for Ulinzi as they begin their title chase this weekened against Zetech Sparks in the Kenya Women’s Premier league.

The game had to be decided from penalties after a 1-1 stalemate in regulation time. Rebecca gave Thika Queens a lead in the 67th minute only for Ulinzi to fight back and equalize through their captain Neddy Atieno.

After none of the sides was able to find a winner in 90 minutes, it was upto penalties to decide the tie.

Both teams were clinical from the spot only missing two out of the 10 penalties taken.

The 11th penalty kicks for both in sudden death pitted the goalkeepers against each other.

Ulinzi Starlet goalkeeper Moureen Shimuli converted and then saved that of her opposite number Mishi Mbaru to secure the Super Cup for Ulinzi Starlets. 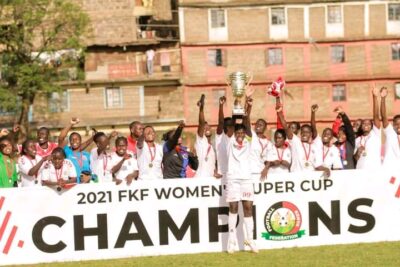