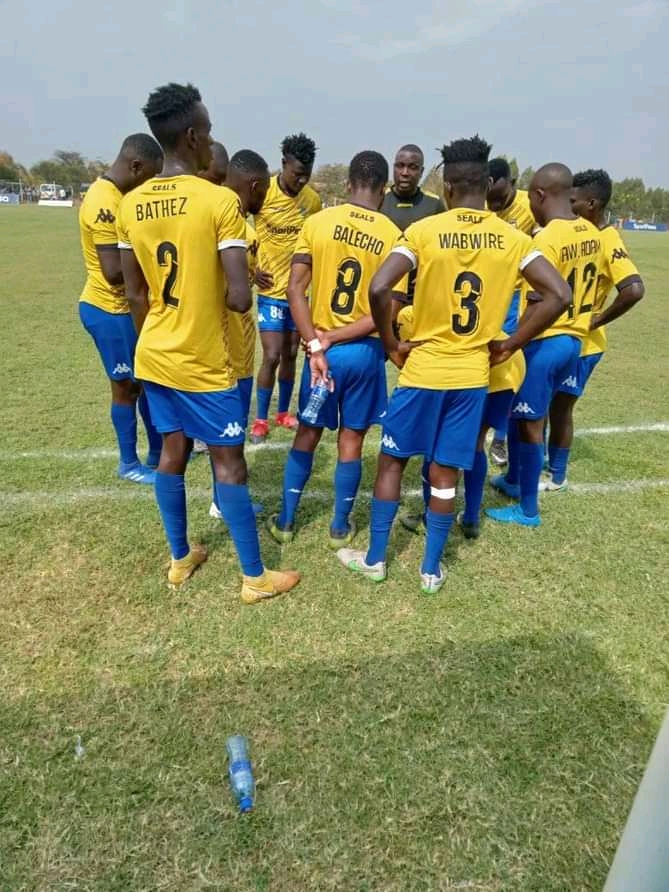 Fortune Sacco Fc drew 0-0 with their hosts Muranga seal, in the match played at St Sebastian park in Muranga county on Sunday the 29th of August. The visitors came to the park on a hunt with every intention to pick maximum points.

Lying 3rd on the log after match day 35, two points adrift second placed Kenya police, a win over seals would have kept their dream of automatic promotion to the Kenya premier league as runners up of the national super league alive

But as they say, never count your chicks before they hatch. Muranga seals had ideas of their own starting the match on the stronger footing, threatening to take the lead early on in the first half. With former Gor mahia striker John kiplagat being a constant pain for ziyad kiwanuku and Henry kinyua in the heart of Fortune’s defense.

Seals almost took the lead in the 17th minute as a half cleared corner fell beautifully in the path of Wilson Kamau who was happy to send a thunder bolt the way of Melvin Nderitu in the fortune goal, but his wonderful strike graced the cross bar for a goal kick.
As if Kamau’s scare had awoken a sleeping lion, fortune had the upright of Mwangi Wilson’s goal deny Vincent owino. His bottom corner bound effort cannoned off the upright for the home side’s goal kick.

Muranga perhaps in an effort not to have a repeat of the reverse fixture in the first leg where they had lost by a solitary goal back in January at the Kianyaga stadium, were the better side much of the first half winning five corners compared to their visitor’s two in the first half.

However inspite of their dominance it was the away team who came closest to snatching the lead in the 26th minute after John Misikhu found acres of space outside the 18yard box but his well taken shot came crushing off the crossbar. Fortune Sacco second time unfortunate.

The first half would end in a stalemate, with five corners for the home team against two for their visitors. The only caution of the half going to Munyovi Dennis in the 47th minute of the first half.

The second half was more of a swap of roles as fortune Sacco did most of the attacking with the home side happy to sit back and defend. Keeping their visitors at bay, thwarting all their efforts at goal. But In the 55th minute John misikhu should have found the back of the net after bringing down a well weighted cross from the left but his ferocious effort went just inches off.

Seven minutes later Robert mutua was guilty of wasting a glorius opportunity from a set piece just outside the 18yard box, his wild effort missing the mark widely.
With the match intensity picking up, physicality creeping in every tackle, emotions started running high and this would see John kiplagat earn himself a yellow card in the 64th minute for ranting at the lines man for what he felt was a wrong call.
The only other decent chance for a goal in the second half, again fell the way of fortune Sacco when Vincent owino found himself unmarked and with enough space to work a fierce shot towards Wilsons goal. But the custodian was equally up to task as his strong punch sent the ball out for a fruitless corner.
Come 90mins and fortune sacco for all their second half efforts were unfortunate not to have found the back of the net. It’s a result that would count as more of ‘two points dropped’ than ‘a point earned’, given that they were the better side in the second half.

The stalemate means that they are now sitting four points behind second placed Kenya police who beat Mwatate fc by a solitary goal in Ruaraka, another promotion contender Kibera black stars had their hopes take a serious dent after they were beaten at home by visiting migori youth. Fourth placed Vihiga bullets play away to MCF and will be hoping for maximum points as they currently sit 4th, two points behind third placed fortune Sacco.

For sure the national super league is poised for such a finale , with only the champions confirmed the race for the second and third positions couldn’t get any tighter and juicier. Just two rounds left who will blink? And whoever blinks will definitely miss.