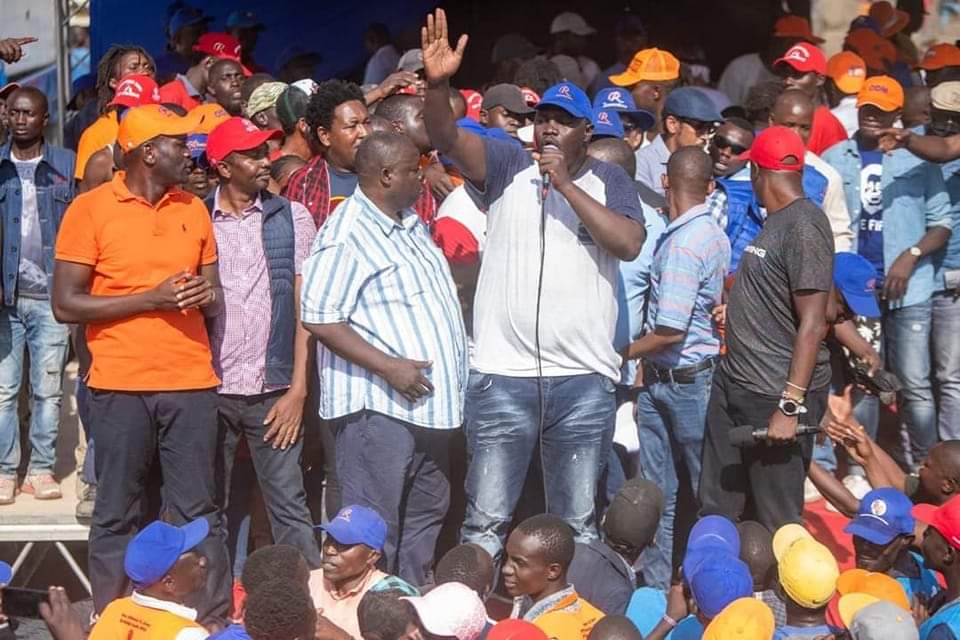 Orange Democratic Movement (ODM) Nairobi youth coordinator who is also the Upper Savannah Ward Member of the County Assembly (MCA) Elijah “Stazo” Omung’ala has urged youth in Nairobi to turn out in their numbers and vote for former Prime Minister Raila Odinga as Kenya’s fifth President in the August 9th general elections.

Speaking during the week long Azimio La Umoja campaigns yesterday, Stazo asked the youth in Nairobi to vote for Raila during the August polls to ensure that they secure their future.

“Vijana, tujitokeze kwa wingi tuchague Raila kwa wingi huyo ndio atatutoa kwa udu (Youths, let us come out in our numbers to elect Raila Odinga during the August elections because he is then only one who will get us out of poverty),” Omung’ala said.

The ward representative called on Nairobi residents to turn up in their numbers and vote for Raila at the August polls to ensure that like other countries in the world, Kenyans can eventually get upkeep money.

“Raila Odinga has promised to give the youth a social protective fee of Sh 6000 which is a new in the country. This is a new level for this country and we want to be part of the journey,” he said.

Omung’ala also heaped praise on the promise to free education program that has been promised once Raila ascends to the Presidency.

“Free education is one of the pillars of a Raila Odinga presidency. I urge all of you to vote for Baba to actualise this dream of a population that will not lament of lack of school fees,” He said.

The MCA also took time to marshall Support for his re-election noting that his track record spoke volumes to warrant his nod back to the county assembly.

“Hata mkichagua Baba, si pia mtaaangalia Stazo kijana wa mtaa kule Savanna kwa sababu kazi tumefanya na tutaendelea? (Even as you vote for Raila, won’t you also look at Stazo in Savanna because he delivered and he is intended to continue),” Omung’ala posed.