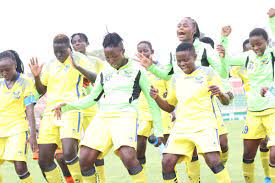 The Kenyan side went into the game having lost their Group B opener 1-0 against Mamelodi Sundowns of South Africa and they scored a goal in each half to pick their first points keep alive their hopes of reaching the last four.

Violet Wanyonyi shot the Kenyan outfit into the lead  from Harambee Starlets striker Jentrix Shikangwa’s assist in the 8th minute before Shikangwa penning her name on the scoresheet with the second goal netted in the 47th minute to seal the Moroccans fate.

ASFAR’s striker Sanaa Masoudy who scored a hat-trick against Nigeria’s Rivers Angels in the 3-0 win  in their opening group fixture was kept at bay by a water-tight queens defense led by Phoebe Owiti and Vivian Makokha.

The win places Vihiga Queens as joint top group leaders with ASFAR on three points each. 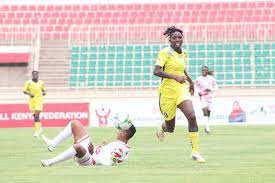 Vihiga’s Tereza Engesha was voted as the player of the match. She excelled in her false nine role, holding up and linking well with both Jentrix Shikangwa and Violet Wanyonyi on either flank.

Engesha was the mastermind of the two Vihiga Queens goals as she started the movement from deep.

With Vihiga also having dropped deep to protect their lead in the dying minutes of the game, Engesha was there to collect long balls booted from the defense and hold up play as she waited for her teammates.

Vihiga Queens needs to beat River Angels on Friday at the June 30 stadium to sail to the last four with the semis scheduled for November 15th and the finals November 19th.