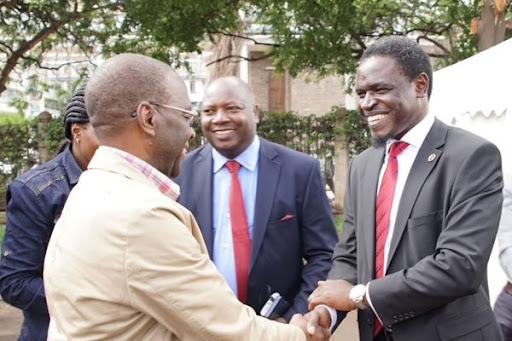 Former Chief Justice Willy Mutunga and Law Society of Kenya president Nelson Havi, who were expected to travel to Germany and accompany Miguna Miguna him to Nairobi will not be there.

The duo will not be the self styled Kenyan exiled lawyer Miguna Miguna  this is after there were delays in processing their visas.

“That notwithstanding, we have advised Miguna to travel because in her ruling on Friday, High Court judge Hedwig Ong’udi said that she has reviewed the replying affidavit of the Attorney-General on behalf of the government and it is manifest that there are no red alerts and the state has said it does not propose to prohibit Miguna from coming back. So Miguna is permitted to travel,” said Mr Havi.

Moreover, Mr Havi said there are two court orders already that direct the government to allow him to use the perforated passport or his national Identity Card to check into the country.

Mr Miguna’s expected return on Tuesday could coincide with US Secretary of State Antony Blinken’s presence in the country.

“We expect that since the Secretary of State would be in Nairobi the US may place on record its position on this matter which is of great impact on the rule of law. I think that coincidence should be for the positive,” said Mr Havi.

For the third time since 2018, lawyer Miguna Miguna is embarking on a journey to return to the country of his birth.

Barring any red alerts that the government told the court are not in existence, the self-styled ‘general’, who is already in Germany, will has departed and is on , transit through Paris, France and onto Jomo Kenyatta International Airport by Tuesday morning.

Mr Miguna is expected to fly either Lufthansa Airlines or Air France.