“We are supporting ‘Baba’ because of his policies.”: Kimemia addresses claims of supporting former prime minister. 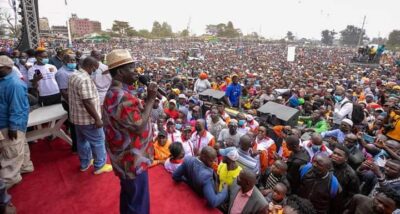 Mt.Kenya governors have not been forced by anyone to support the opposition leader Raila in 2022.

Nyandarua county governor Kimemia Francis dismissed the notion that some of them were being forced to support Raila after president Uhiru’s retirement in 2021.

“Those of us who have rallied behind Baba (Odinga) are doing so willingly. There are senators, Members of the National Assembly, and other leaders from the region who are willingly supporting him,” Kimemia said.

The governor was at Citizen TV breakfast show on Monday where he made the remarks. There was a panel that had Ole Kina Ledama ( Narok) and his Meru counterpart Mithika Linturi.

Kimemia who hosted the former prime minister in his county was responding to the claims that majority of Mt. Kenya leaders were supporting Raila and were being coerced by the state.

He added; “I come from the mountain (Central Kenya); the people have taken a position and made their mind. Since Raila entered the Handshake deal with President Uhuru, so much has happened.”

“We (governors) are not criminals. We are not threatened or intimidated by KRA, EACC, or DCI. We are supporting Baba (Odinga) because of his policies,” Kimemia said.

Raila is yet to announce his candidate for the 2022 presidential race,but will reveal that person in December 9,2021.

Raila’s biggest competitor to the presidential seat is the deputy president William Ruto. Raila seems to be having the president’s support who has been trying to influence his succession and has thrown his weight behind Raila’s ambition.