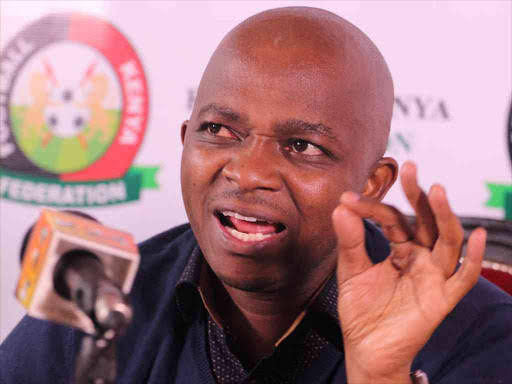 According to the president, the plot and outcome of the so called inspection is a predetermined one. And that the “inspection” was just a formality, a mere gimmick to try and sanitize a reckless, carelessly thought mission in futility.

And to back up his claim on a predetermined outcome by the sports ministry, Mwendwa questioned how six years of documents, most of which are financial documents could be fully inspected in two days ,and a report written there of the inspection?

““We know they want to remove us, illegally. We have been audited yeah and they got nothing, DCI nothing, Auditor General twice-nothing. FIFA audits us every year. We have passed every year. And then you see that Kenya has lost five nil to Mali and you think it’s time to attack us.”

Having been silent since Cs Amina ordered an inspection on FKF, It was the first time that the president was coming out to set the records straight.

He seemed to suggest the cluelessness of the Cs and her team, wondering if she was aware her actions could deny Harambee starlets an appearance in the upcoming AFCON tournament, as starlets are strongly just few matches away from qualification to their second appearance in history at the tournament.

““Let’s look at the whole picture; the Harambee Starlets are two games away going to AWCON for the second time in our history. They also have a chance to go to the World cup. These girls have worked their whole lives for this moment-you want to tell they won’t play?”

He alluded that this is not time for politics, but time for football development, coaching courses and Referee courses and for growth in women football.

“How many elite coaches are there in Kenya? We are currently training 50 for CAF B without help from the Government. We have trained 4,000 at the grass roots and we will continue to do so because coaching is the center of football development” stated Mwendwa in a snippet of his achievements.