Which money, madam CS?-FKF dismisses Amina claims of Ksh.433M accorded to national team,seek clarification as they appear before senate 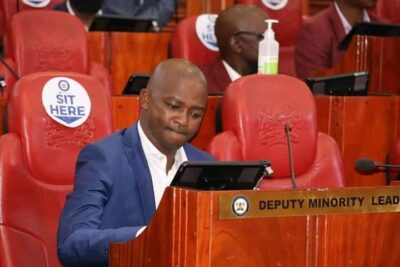 Football Kenya Federation (FKF) seeks answers over the Sh. 78M that has been unaccounted for over the last three years. The FKF president Nick Mwendwa appeared before the Senate Committee on Labour and Social Welfare over the audit together with CEO Barry Otieno and requested the ministry of Sports and National Sports fund, to account for the Sh.433M which cabinet secretary Amina Mohamed announced in parliament last week that they had given the football body which claims to have received on Sh.355M from the ministry.

On Tuesday, Makueni senator Mutua Kilonzo junior sought an intervention from the Labour and Social Welfare committee over what he described as an ‘impromptu inspection’ on FKF, which the senator termed as unlawful.

The CS and her principal secretary Joe Okudo who have been under attack on social media for the past week did not attend yesterday’s session as they had requested that they needed more time in order to respond to the claims. The two will however appear before the house on Thursday next week.

Mwendwa was put to task by Elgeyo Marakwet Senator Kipchumba Murkomen who asked him why the federation appeared to be resisting audit, which was directed by the CS a fort night ago.

“We are very open to audit. We have been audited five times in five years by Fifa and in all occasions they were satisfied with their audit.

We have also been audited by several local agencies including the Sh244 million in question and we accounted for every shilling.

We are just worried that from the onset, all steps by the ministry indicated a sinister motive,” Mwendwa said.

The chairperson of the committee Johnson Sakaja said that the inspection of the federation had to go on but assured them that the exercise would be done in a lawful manner.

“Furnish us with all the details of the the funds that you have received from the ministry. We shall write to the ministry asking for the same,” Sakaja directed.

He added: “I want to make it clear that there is no pro Amina or Mwendwa sides here. We want the best for football.

Therefore, FKF and all federations receiving money must be audited, there is no escaping that. I want to mantain that If any individual is found culpable of any theft or wrongdoing, the law must follow.”

Kericho Senator Aaron Cheruiyot sought to know why the federation was having a high turn over of Harambee Stars head coaches, having contracted six coaches in five years and why they had fell out with a section of corporate sponsors. He demanded for detailed answers when the federation officials are re-invited to the House again next week.

Narok Senator Ledama ole Kina challenged Mwendwa to make public the over Sh600 million the federation had received from world football governing council Fifa and how they had used it.