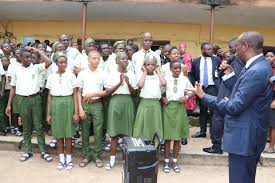 A headteacher, Jacob Muimi Nguli, who resides in Ithumbi, Mwingi central in Kitui county has committed suicide at his home.

The headteacher for Wikithuki primary school is said to have left behind an emotional suicide note explaining what is believed to have led to his demise.

From the contents of the letter it is believed that the wife of Jacob is the major cause as to why he decided to take his life. He complained about the wife not giving him peace of mind at home and turning everyone against him,even his own blood children percieved him to be a bad person.

Jacob wrote that the wife never appreciated his efforts for providing for the family. She had incited the community against him by telling lies against him.

Jacob thanked those who supported him and stood by him in his difficult times. He also stated in the note that his wife had threatened his life saying that anything can happen to him.

The area KNUT executive secretary, Michael Munyasya urged teachers not to remain silent when fighting depression and should report cases of depression among colleagues. He said that the union will work hand in hand with Teachers Service Commission (TSC), to give guidance and counseling to teachers in the right direction.