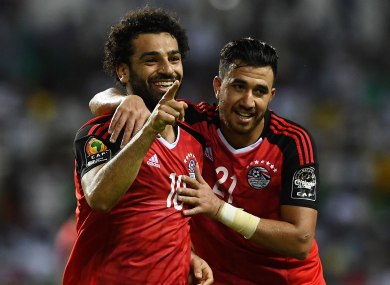 Mohamed Salah got the better of his Liverpool club mate Sadio Mane as Egypt edged Senegal 1-0 in the first leg of their World Cup playoff on Friday, March 25th, 2022 in Cairo.

Salah’s early shot in Cairo cannoned off the crossbar, hit French Ligue 2 club Nancy left back and Senegal defender Saliou Ciss and went in to give Egypt a slim advantage over the newly crowned African champion to take to the second leg in Senegal on Tuesday, March 29th, 2022 in Dakar.

Egypt started the playoff at breakneck speed at Cairo International Stadium and the own goal from Ciss came in the fourth minute. Salah sprinted away after it went in and was mobbed in celebration by just about every player from the Egypt bench.

The Salah-Mane international rivalry continued six weeks after the Liverpool teammates met in the final of the African Cup of Nations in Cameroon. Then, Mane hit the winning penalty in a shootout to give Senegal its first major title as Salah watched on helpless.