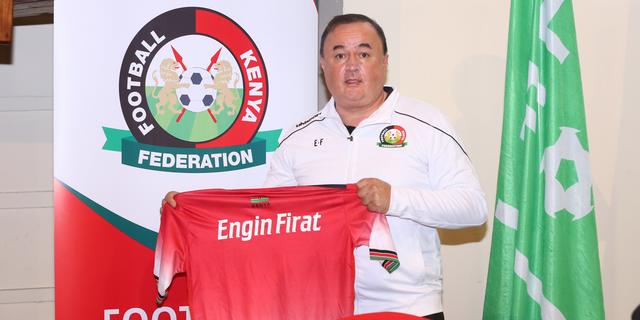 Harambee stars head coach Engin Firat has named a 33 man provisional squad to hit camp starting this Thursday as he engineers a way to qualify for world cup in Qatar.

stars next assignment in the qualifiers is a back to back encounter with the table toppers mali, who sit just a couple of points above the East African side.

Engin has recalled several players back into the squad albeit provisionally. Spain based midfielder Ismael Gonzalez and former yanga shots stopper Faruk “waza” Shikallo makes a return to the team .Simba Fc’s dependable centre back Joash Onyango also makes a return after serving a suspension.

Bandari’s Reagan Ndemi, Wazito’s Musa Masika and Erik Zakayo of Tusker fc are the other youngstars who makes Firat’s provisional squad. Philip mayaka of Colorado Rapids and Sydney lokole of K-Sharks also gets a nod from the Turkish tutor.

Kenya travel to Morocco on the 4th of October. where they are scheduled to take on theirs hosts, Mali on the 7th before travelling back to Nairobi to play homage to the west African side on the 10th of October.

A win for Engin boys will catapult them atop the group and better their chances of a maiden world cup appearance. Firat will be looking to better his predecessor, Jacob Mulei’s record of two draws from the opening two group matches.

Meanwhile the group’s bottom placed Rwanda hosts third placed Uganda on the 7th of October before the cranes host the reverse encounter three days later back in kampala.