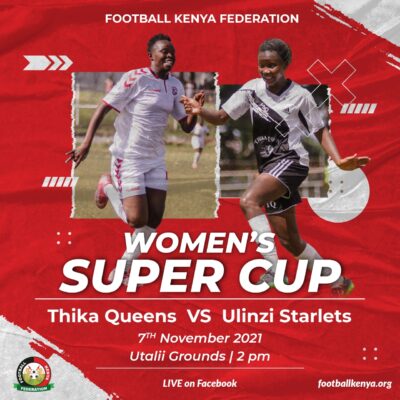 The super cup is the official curtain raiser for the 2021-2022 season, which kicks off on Saturday.

The two teams will face off by virtue of Thika winning the Women’s Premier league last season while Ulinzi Starlets won the women’s cup.

Ulinzi Starlets have a better chance to add silverware to their impressive year as they have been actively involved since the season ended.

Goalkeeping sensation Maureen Shimuli, strikers Neddy Atieno and Lucy Mukhwana were rewarded for their scintillating performance with Harambee Starlets call ups for the African Women’s Cup of Nations qualifier match against South Sudan, where Atieno scored four goals in the first leg encounter palyed at the Nyayo Stadium on Wednesday.

Both teams will use the fixture to gauge their preparedness ahead of the new season.